Next week is a big one 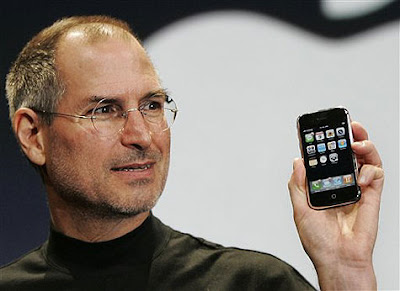 Check out this demonstration, if you get a chance.

I'm pretty excited about the iPhone. It's going to be released June 29th. Even though I've never been more excited about a gadget in my life, I'm going to hold off on buying one.

First, I'm stuck in the middle of a contract with Sprint. I've had Sprint for over 6 years, but I'm becoming increasingly frustrated with the dropped calls, and my phone is about due for an upgrade anyway. It's taken some abuse. I'm pretty hard on phones.

I'd pay the early termination fee if that was the only issue, but another huge issue is that neither I, nor anyone else has any idea how much it will cost to have an iPhone. No one knows what the plans will run.

This could be a deal maker/breaker for a ton of people. AT&T could pick up a huge number of subscribers from other networks if it comes out with a reasonable plan. If the AT&T suits try to capitalize on the iPhone's popularity, and force the early adopters to pay out the nose for a plan, they'll be making more money off of fewer people. I'd think getting customer's to switch to their network (via 2 year contract) would be more important than profit margins on a small subset of subscribers. Maybe they do too. I suppose we'll find out next week.

Finally, I'm going to let the initial batch of users determine how well it works. I'd like to see one in action, and even use one myself before paying an early termination fee of $175, $600 for a phone, and a signing a 2 year contract on an (undoubtedly expensive) rate plan. Can I replace my Blackberry with it? I know it doesn't support PUSH email, but hopefully I can just forward my work email to the built in Gmail on the phone. It doesn't have to BE a Blackberry, so long as it does the job fairly well.

How well does eBay work on the iPhone? That will be huge for me. That's the main reason I NEED the phone, as opposed to want it. Also, Google's big idea of being able to punch a UPC into your cell phone, and get instant price comparisons and reviews will be closer to reality. I realize you can surf the web on other phones, but my Treo is a great example of how this simply doesn't work very well in its current state. Apple promises the "real internet" on its phone. Hopefully it delivers.

Cool applications will be announced in the next couple of weeks. If I can get Google Reader (or better yet, Newsgator) to run on the iPhone, with decent email, that alone will probably be enough to get me. If they can come out with an instant messaging client (even web-based), that will help a ton too.

Basically, I'm almost sure I'll get the iPhone. I just want to make sure that I know what I'm getting before I do so.
Posted by Brad Raple at 11:23 AM