Why can't it always be this easy? 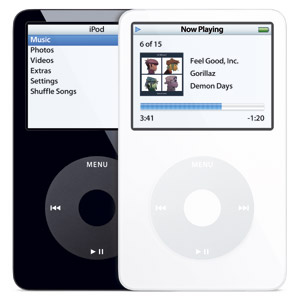 I ordered an iPod when I ordered my iMac, and was told by Apple that there was a $179 rebate through the educational store if the iMac was purchased with an iPod. I went ahead and ordered a 30GB iPod, and was looking at $90, after the rebate came back.

Problem was, the fine-print of the rebate said that the new iMacs didn't qualify for the rebate. I was kinda bummed, but didn't blame the Apple rep too much, because I ordered the iMac less than 1 hour after it was announced. I called Apple to arrange a return.

Much to my (pleasant) surprise, a friendly, native English speaker told me that because the error was Apple's fault, they'd refund my credit card the amount of the rebate. I was shocked. Sure enough, they hooked me up. I really wish more companies were like that.
Posted by Brad Raple at 10:23 PM No comments:

The iMac is working out smoothly, for the most part. 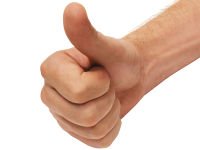 One snag I've run into is that my external backup drive from my Windows machine is formatted in NTFS, and for some reason neither my iMac nor my MacBook can read it. I'm currently installing Windows on my MacBook via Boot Camp so that I can access it. Once I get that done, I'll dump my data on my iMac via networking and format the drive in HFS so I won't have that problem anymore.

Once I have all my files on the iMac, I'll hook up the external drive and set it up for automated backups, so I never lose my data again. I'd like to get some NAS, but it would probably be cheaper just to buy a low-end/used computer for a fileserver.

In retrospect, I should have just kept my CPU/Motherboard/RAM that I sold. The money I got was nice, but now I have these extra parts, and will probably spend close to that just to get a good backup system, whether I go the NAS or cheap PC route.

You live and learn, I suppose.

edit: Just in case "thepcguy" misconstrued my comments about keeping the old PC, I meant to use pretty much strictly as a fileserver.
Posted by Brad Raple at 9:55 AM 6 comments:

I bought the new iMac announced today. 17" 2.0GHz version. I got the EDU discount, a 30GB iPod with the $179 iPod rebate, and a free Canon Multifunction.
Posted by Brad Raple at 9:33 PM No comments:

Good luck with your "all Mac" household. I hope you don't enjoy using any of the most popular software, since it's only available on PCs. Macs are great computeres--if you enjoy paying double for machines that aren't compatible with the leading software.

This is the kind of crap people dump on Mac users all the time. What the guy doesn't realize is that I've used Windows PC's for years, have sold them for some time, and up until this weekend owned one. I used them day by day, side by side for years. What I found is that the more time that went by, the more I wanted to use my Mac laptop instead of my Windows desktop. That's not the way it should be.

And it's not for the reasons many people might suspect. I had a very nice computer, as far as Windows machines go. I understand how to keep it free of viruses and spyware, unlike the vast majority of Windows users. I built it myself, as I have probably a dozen or more others. I definitely know my way around a computer. This was an informed decision, made after a great deal of thought and side by side comparison. Let's take the comments one by one.

"Good luck with your "all Mac" household."
-OK, nothing too bad so far, although I do detect some sarcasm.

"I hope you don't enjoy using any of the most popular software, since it's only available on PCs."

-OK, now it comes out. To tell the truth, I DON'T like using software, listening to music, or doing anything else simply because it's "popular". If I did, I'd probably would have spent high school listening to N'SYNC and college listening to Britney Spears. Simply because something's popular doesn't make it better. Just ask the people who bought tickets to the 3 back-to-back-sold-out New Kids on the Block shows in Wichita when I was a kid.

Further, no software is available "only" on PCs. I can run ANY software his computer can. Yes, even Windows. And yes, even Linux. But his computer can't run OS X. Or iLife. Or Final Cut. Or NetNewsWire. Yadda, yadda, etc. I do plan on installing Windows, in order to run a few applications that don't have Universal Binaries yet, such as Nikon Capture, but I'm switching to the Mac entirely so that my desktop experience will be as productive as my laptop experience. I have yet to find a Windows based RSS reader that I like nearly as much as NetNewsWire Lite, which is free. And it's not for lack of trying. I've installed several. I also enjoy the intangible "feel" of the OS navigation much better in OS X. It's just easier to get things done.

I can also run Photoshop, MS Office, (better yet, OpenOffice), Firefox, etc. All of which were "popular" programs last I checked. Further, I can run Half Life 2, Doom 3, or whatever other video games I decide to play, as if I have time.

"Macs are great computeres--if you enjoy paying double for machines that aren't compatible with the leading software."
-Well, as tempting as it is, I won't bag on the guy for his spelling. I will bag on him for being wrong yet again. I paid under $1200 for a brand new iMac, a 30GB iPod (MSRP $299), and a multifunction printer/scanner/copier (MSRP $129).

This compatibility thing has got to go. I can run ANYTHING he can. ANYTHING. Period. Further, I don't want to run his "leading" software. I've done that. For years. And I'm switching for a reason. And where in the hell does he get the double part? Granted, I'm kind of a deal savant, but still. Subtract out the price of the iPod and printer and I'm under $800.
They were a good deal before today, and now they're more powerful and cheaper at the same time.

Further, there is NO Windows manufacturer that makes a computer with an equivalent design, for ANY price. The specs aren't too shabby either. It has a Core 2 Duo CPU, 1GB RAM, a decent video card, WiFi, Bluetooth, and a high resolution 17" LCD, all in one tiny form factor. If I did some coupon code stacking, I could probably get an equivalent Dell for about the same. But I'd still be stuck in Windows Land (yes, this IS a negative), and have a PC loaded with bloatware that would require me to spend the first hour uninstalling the garbage that comes on it. And I couldn't get a 17" LCD with that resolution outside of a laptop. I'd also have a big, ugly box, which would never be able to run iLife.

And that's a BIG thing. With iLife, my mom can make a great DVD presentation. My frigging mom. She's done it. I don't think there is any software available for Windows that is equivalent to iMovie, at any price, let alone "free". Sure, there are more professional options, but first, they have a more "professional" price, and second, my mom would never be able to work them, much less figure them out on her own like she did iMovie. And iMovie is just one part of iLife.

You know one piece of software I don't need with my iMac? "Fill-in-the-blank" Antivirus 2005/6/7/8, etc. I'm sure someday viruses will be a threat on Macs, but that day has not come yet. I've been running a Mac for 4 years with no viruses. I used to get bi-weekly calls from my mother, needing me to walk her through the reformatting process due to her inability to keep viruses off her PC. I never had that problem personally, because I know better, but still. I don't get those calls anymore, because she now has a Mac.

All of these are standard responses to standard complaints. But I'm telling you, I've used both systems for years, and for many reasons, I'm anxiously awaiting Friday when my new iMac arrives. There won't be any "gotcha" surprises due to me leaving Windows. I'm leaving it behind gladly, and made the decision with my eyes wide open.
Posted by Brad Raple at 8:12 PM No comments: 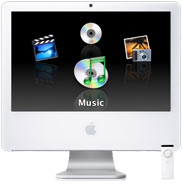 Well, we're officially an all Mac household now. I sold enough parts out of my Athlon 64 box that it's no longer really a computer. I'm going to get some sort of Mac desktop, but won't know until September 12th which one. Apparently there's speculation the new Minis are coming, but the odds are even higher the new iMacs are coming, including a 23" version. As much as I'd like to have that beast, I'm thinking of sticking with a 17" version, depending on what changes on the 12th.

If the price is low enough, and there are enough other upgrades to make it worthwhile, I might do a 20". Otherwise I'll keep the 17" and use my 2007FP as an external monitor. I'd like to get a couple external hard drives and have the thing set to automatically backup everything. When the new Time Machine feature in OS 10.5 comes out it will be very handy.

On a related note, apparently Apple may be releasing a cell phone soon. I'd like to see that.
Posted by Brad Raple at 8:32 PM 1 comment: