It's amazing to me that Intel has such a high marketshare with performance numbers like this. And they can't even make the value argument. AMD is cheaper and faster at almost all tasks, at almost all pricepoints. I've built several systems, and every one of them has been an AMD.

I don't understand how Intel is so screwed up that they'd let a rival that is so much smaller beat them so badly. I'd like to see them turn the corner though. Competition is always good for consumers, and being on top only lasts so long. Ask Nvidia. Or ATI. Or 3DFX for that matter.

On the other hand, Intel clearly has the upper hand on mobile processors, which is good for me. Because Apple is using Intel chips in the future, it's likely that I'll end up with an Intel in my computer for the first time in a long time. Of course, that's fine with me, because my Apple's will probably be laptops for some time into the future. I think using Intel is the right decision for Apple, because even though AMD is better, people (because of Intel marketing) don't know any better and prefer Intel. Going Intel will sell Apple more computers, raise their profits, and stock share prices. I do think getting into an exclusive long-term contract with Intel (a la Dell) is a bad idea though. You never know when things will change.
Posted by Brad Raple at 8:09 PM No comments:

The results of my shopping

I ended up getting a laptop at Wal-Mart for $378.xx. I was surprised to see that it's actually a decent computer. Needs more memory, but that's in the process of being fixed. My relatives got some too. Mine's going to be used once, for finals, and then re-sold on eBay. It's kind of a shame, because it's really a good computer. I think it's much better than the ones Best Buy and Circuit City were sellling, and I think it's official to say that it is the cheapest brand new laptop ever sold in North America. $378 with no rebates is REAL cheap. But the build quality seems decent, and unlike its competitors it has a longer lasting battery with mobile technology built into the CPU. I'd expect to get 2.5 or so hours out of it. I've heard the others were closer to 1.

The other good news is that I got signed up for a ton of AOL subscriptions at CompUSA. You sign a year agreement for AOL, and get a $250 gift card in return. Normally it would cost $288 bucks for the service, or to cancel, but you can use the $15/month AOL for Broadband service, which brings it to $180 total. So you spend $180 and get $250. Or so I thought. I called yesterday to cancel, and the CSR on the other line told me that there was no cancellation fee. Huh. I might have picked up a free $1500 at CompUSA. I'll keep you posted.
Posted by Brad Raple at 10:01 AM No comments:

I'll say it again. WOW. I missed the boat on this round, but I'm looking forward to the PS3. I'm gonna make some money. I have to get all my ducks in a row before D-Day on that one though.

Edit: HOLY FLAMING WOW. I'm skeptical that this can be real.
Posted by Brad Raple at 7:42 PM No comments:

I listed some of my lenses on the new Google Base service. My initial impressions are positive, but it could really use some improvements. Such as the ability to add HTML to your listing. At least some basic editing functionality like Blogger has would be nice. I'd like to be able to easily add hyperlinks, change font size, type, and color. While I'm at it, it would also be nice if Blogger had a file upload service, so I could post my resume, etc.

I'd like to see this put some serious pressure on eBay. I've made a lot of money from eBay, but competition might mean I could make more, because they're making less. What I'm REALLY looking forward to is when they come out with a PayPal killer. I can stand eBay taking a chunk, but it really gets me that PayPal charges so much, and provides so little in return. Unfortunately it's almost a necessity if you work on eBay.
Posted by Brad Raple at 7:33 PM 1 comment: 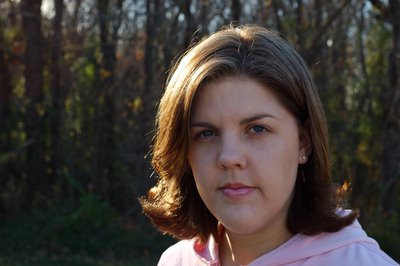 At least I think so. Hillary disagrees, but then again she hates any picture of herself.
Posted by Brad Raple at 8:16 PM No comments:

The power of good editing 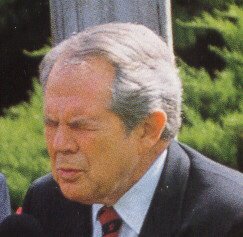 I'm preparing some resume and job application materials, and I've come to an amazing discovery. I had written a cover letter and resume and gone over it several times. As should be done with any important document, I had it looked over by other people. Some people pointed out stylistic approaches that were better. Some people pointed out things that were flat out wrong, like missing words. I edited it, and repeated the process.

It amazed me that no matter how many times I edited it, I could always seem to come up with something new that needed fixing. And we're talking about a page and a half letter and a one page resume, not a 400 page novel. I was finally prepared to turn it in, and at this point, I looked at it, Hillary had looked at it, TWO Human Resources people had looked at it, including one that is head of HR for his company, and two law students, some of them several times.

I was getting ready to turn it in, but I noticed that my buddy Jason had emailed me overnight telling me I was missing a word. I looked, and sure enough, there it was. Or wasn't, I suppose. It blew my mind that after that many people looking at it, and giving it the OK, that it still needed work. I went back at it, and probably made a dozen more changes before I finally felt that it was as good as I could get it. Most of the changes after that were simple stylistic changes, to make sentences sound more effective, but WOW. I could probably find five more ways to make it better if I looked at it again. I think I've long since passed the point of diminishing returns though. So it's in the mail, on its way.

The lesson to be learned is that having someone look over whatever you're going to publish, write, or say can have enormous advantages. Someone should tell Pat Robertson.
Posted by Brad Raple at 4:25 PM 1 comment:

Another view of St. Mark's 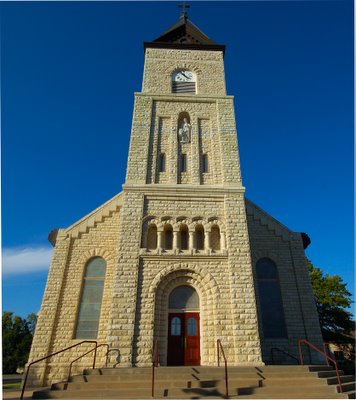 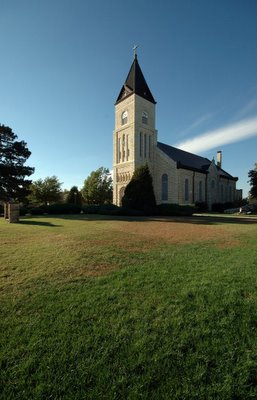 This is the church in my hometown. I grew up near there, and it is a pretty big deal. I can see it from my parents' house, which is about 4 miles away. There's an interesting story behind the church.

There was a watch factory that opened in Wichita around the turn of the century that was made from big stone blocks. Business wasn't very good, so the factory closed down, and the people from the town purchased the stone from the factory, and carted it from downtown Wichita to St. Mark's, which is a LONG way, if you're going on a horse drawn wagon, and have to cross a creek. It took them pretty much all day to make a single trip.

I don't remember how long it took them to finish, but suffice it to say it was a long time. The church is close to 100 years old now. I don't know if there's anyone alive who saw it built. It seems pretty amazing to me that it's lasted that long, but probably because we live in a disposable society. Wal Mart's go up and are torn down in under 10 years. Seeing St Mark's Church makes me think of Europe. It seems that buildings there are built to last, and people expect them to.

It would be nice if we had some level of continuity about our architecture. Maybe it's part of what makes America, well, America. That things should be cheap, and functional, rather than enduring, and beautiful. At least architecture anyway. I'll post some pictures of the law school sometime to drive the point home.

HERE, and HERE. These are sites that give a heads up on the ads that are coming out on Black Friday. That's the day after Thanksgiving (November 25th) for the uninitiated.

When I worked at Circuit City, it was crazy on Black Friday. I got up at 4:00 AM, was at work by 5:00, and the doors opened at 6:00. It was pandemonium for the next 3 hours or so. People fighting over the crappiest DVD players you could buy, for 10 bucks less than the normal retail price. After about 9:00 or so, the salespeople were freed up to move around, and we made a killing. I had a partner both years I worked there, and we had a system down where one guy would round up the big ticket customers and bring them to the other guy. We'd then double team them when it came to the warranty pitch. I got off around 11:00 PM, and never sat down. I had a sandwich and Pepsi, while standing in the breakroom. 5 minutes later, I was out the door and back at it. It sucked, but I cleared about $1k each time, and that was splitting half and half with the other guy.

Last year I had a new tactic. I was unfortunately working at Best Buy, which had all of the crappiness of Black Friday but none of the payoff. So I went to another Best Buy and bought some of their laptops that were going to be $500 on Black Friday ahead of time. Once I got off work on Black Friday, I went back to the other store and had them pricematched. They went off to eBay, and I made some quick cash.

I'm planning on hitting up CompUSA at midnight, because they're opening early. If the deals are good enough, I'll swing by there, and then go somewhere else. I want to hit as many places as I can, and get some good stuff for myself for next to nothing, and eBay the rest.

It's crazy, but I'm all about the bargains.
Posted by Brad Raple at 10:51 AM No comments: