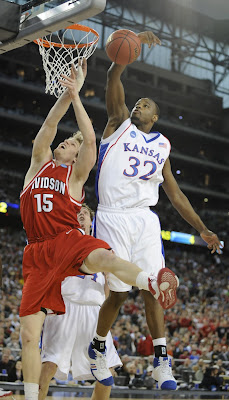 I unsuccessfully tried to find a picture of Stephen Curry weeping inconsolably, but this gets the same point across.

I'm not one to complain about poor officiating, but the calls this game were worse than I've ever seen. Numerous flat out disasters. Jackson being whistled for a shooting foul, without any contact at all. Chalmers being shoved to the ground by a running Davidson player. Chalmers being held (literally) by the arm to prevent him from picking up a loose-ball. My DVR doesn't lie. We got ripped.

That being said, I think the play of the game was Collins coming over to defend Curry at the end of the game. He was supposed to take the shot, and got Rush to leave his feet. He just had to wait a second for him to fly by. Fortunately, Collins figured it out, and was on top of him before he had a chance to shoot.

A little close for my comfort. I'm excited about playing North Carolina on Saturday. It should be a good one. I think if anyone can run with the Tarheels, it'll be us. But we'll need to play much better than we did today.

The officiating is not what made the game close...there were bad calls both direction...certainly wouldn't say KU was ripped.

The game was close because KU played tentatively and tight, while Davidson played with confidence.

Of the two teams, I think Davidson was the better team on the floor most of the night, but got gassed at the end....advantage KU because of depth.