Darnell Gets His Deal 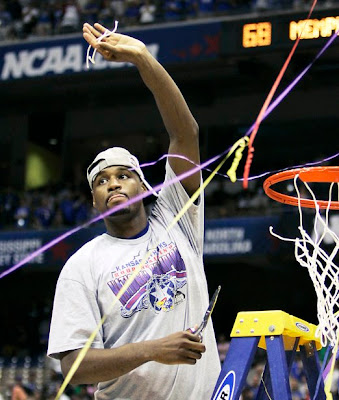 Darnell Jackson, one of the most pleasant surprises from KU's last two seasons, just signed a 3 year guaranteed contract with the Cleveland Cavaliers. He was definitely one of my favorites. No one thought he'd make the NBA a couple years ago, but due to his remarkable improvement, he got it done.

He wrote an open letter to the fans, and asked the Lawrence newspaper to publish it. This was a really great gesture, and goes to show that there are some guys out there that really deserve to be rooted for.

Taken from the Lawrence Journal-World

Just about five years ago I realized a dream when coach (Bill) Self offered me a scholarship to become a Jayhawk. I came to Kansas as a young man who had a lot to learn in a lot of ways. My freshman year was a real eye opener.

On one hand I got a chance to play with some of the greatest players to don a KU uniform in Aaron Miles, Wayne Simien and Keith Langford.

But the rigors of big time college basketball was a real challenge. I had to grow up quickly and learn to take care of business in the classroom and on the court. As all of you know I was a role player my freshman year and played in only 13 games.

But what I hope you all realize is I felt so fortunate to play for the Jayhawks and especially to practice with and learn from guys like Simien and Langford.

By my sophomore year I was a little more prepared for what I needed to do. Coach Self gave me a chance to play a lot more. That year was one of the hardest years of my life. As most of you probably recall, my mom and grandma were hit by a drunk driver that year.

I was already struggling with trying to grow up and be a better student and a better teammate. Then when my mom was seriously hurt and my grandma was killed, I felt like the world was caving in on me. That, I think, was the first time I really truly started to understand what it meant to be part of the Jayhawk family.

Looking back I see what incredible support I received from so many Jayhawk fans that I had never even met. At the time I was really struggling to battle the “woe is me” trap. But now I can look back and see how I learned so much from all of you who were so ready to offer love and support.

I can tell you now, that is one of my most cherished memories as a Jayhawk. I loved winning on the court but it was then I started to see that being a Jayhawk was really something that would be there for me the rest of my life.

By my junior year I was still struggling with insecurity about handling all the stress I felt. My mom was still in pain and needing surgery after surgery. My little brother and sister were growing up and I felt I needed to be there for them. I still lacked confidence that I could step up and be what the coaching staff was hoping from me.

I felt like I needed to be a leader and to represent KU in a great way that all you fans deserved. But I still needed to grow up and learn how to handle all these things. But everywhere I turned there was always a KU fan with an encouraging word.

At the time I sometimes thought that no one really understood what I was going through. But looking back I have learned that even if that was true what really was amazing was that people just wanted to show love and support.

I now realize how that continuous support from all of you was always something that lifted me up and made me feel good and positive. It was my junior year that all my inner turmoil came to a head. I felt so overwhelmed by everything that I just reacted without really thinking and came home to Oklahoma City. I just felt I couldn't take care of my family and school as well as being the Jayhawk everybody wanted me to be any more. I was just feeling overwhelmed.

That is when it happened. After coach Self came down and talked with me I decided to come back. It was then I started to realize that the reason I was feeling so overwhelmed was that I was mostly focusing on myself and my stress. All this time I was playing for the greatest basketball school in the country with the best fans hands down.

I started to see what a blessing it was to have people who were so willing to show love and support. And I can assure you that you fans did show love and support far beyond anything I could have hoped for. I also realized that the coaching staff was trying to get me to become the best I could be.

I realized that all of the yelling and pushing was just trying to get me to work harder and improve. Over the summer between my junior and senior years I got to spend a lot of time at home. I really began to see and focus on all the blessings I had rather than all the trials. I came back for my senior year determined to be the best Jayhawk I could be.

A very close friend of mine, my mentor, always would tell me that when I was so blessed I needed to understand that put a responsibility on me to multiply those blessings by giving blessings to others.

I really was seeing what a great blessing it was to be on such a great team, with great coaches but most of all having the Jayhawk on my jersey in a packed Allen Fieldhouse with the most knowledgeable and enthusiastic fans anywhere.

So I wanted to start giving back by playing my butt off and giving all you fans something to cheer about. In April I was able to realize a second great dream along with all my teammates when we brought a National Championship back to Lawrence.

I didn't think anything could ever top running out on the court at Allen Fieldhouse. But when 100,000 fans showed up to celebrate our championship I truly felt so honored to be able to be a small part in bringing such joy to all you fans.

Believe me, it only begins to pay you back for all the love and support you have given me these last four years.

Well, this week I realized a third dream when I signed a multi-year contract to play in the NBA for the Cleveland Cavaliers. I am very excited to play in Cleveland. But I want all of you fans to know that no matter where I go or what I do, I will forever be thankful to you for showing all the love and support for me these last four years. I AM FOREVER A JAYHAWK. I even have a degree to prove it. You fans have taught me so much and meant so much to me so I wanted to send you this letter saying THANK YOU.