The law of unintended consequences... 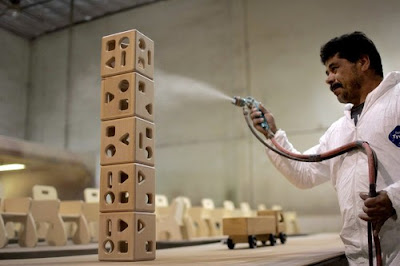 After last year's toxic toys scare, the government stepped in with strict regulation to combat lead and toxin-containing toys imported from China. However, like most rushed government policies intended to combat a perceived crisis, they didn't exactly think it all the way through.

"If they don't change the law, we'd have to close our doors," said Nick Christensen, owner of Little Sapling Toys in Eureka, Calif. "We won't be able to afford the testing."

Christensen, who makes everything by hand, says the only things his products contain are wood and beeswax, and he's bitter about being forced to test them for lead.

Other manufacturers say they've been quoted testing prices of $24,000 for a telescope, $1,100 for a wooden wagon and $400 for cloth diapers, according to the toy alliance." via the LA Times

It is literally forcing small U.S. businesses to shut down. I somehow don't think that this is what Congress intended. But hey, they never seem to learn that rushed legislation isn't always the best way to deal with problems.
Posted by Brad Raple at 7:56 AM