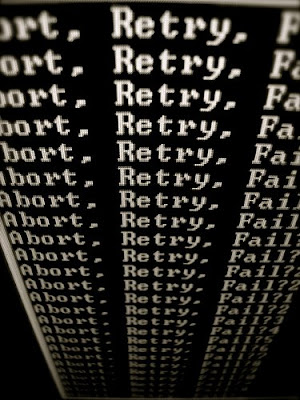 Question: Won't the government need far more than the $350 billion that's remaining in the financial rescue funds to really solve the credit crisis?

Obama: Well, the credit crisis is real, and it's not over. We averted catastrophe by passing the TARP legislation. But, as I said before, because of a lack of clarity and consistency in how it was applied, a lack of oversight in -- in how the money went out, we didn't get as big of a bang for the buck as we should have.

Is he saying that the plan wasn't very well thought out? Didn't he vote for it? Didn't Congress pass it? Didn't people warn that this was exactly what would happen, when you ram through legislation committing $700 billion, with no time to think it through? I know I did.

But hey, they'll get it right this time. Promise. Just give them another $800 billion. They'll do better. But we don't have time to argue! Or debate! Or think!

Despite the problems with these programs, at least they were put to a vote, and people realize they are happening. Compare that with the Treasury, which has spent nearly ten times this amount in the last couple years with no oversight or approval from Congress.

For the record, I didn't approve it either.

I was also struck by this quote, regarding US military incursions into Pakistan:

"It's not acceptable for Pakistan or for us to have folks who, with impunity, will kill innocent men, women and children."How ironic. We're killing civilians in Afghanistan faster than the insurgents.